If you are looking for information about Nikon Keymission 360, we're guessing that you need a camera that shoots 360 photos and videos in 4K UHD. Whatever story you want to tell, this camera is perfect for the job. Still, you need to consider other options, too.

Comparing various products can help you pick the ideal camera. Most of the 360 cameras on the market have 4K resolution, but there are more things to consider beyond images. Manufacturers have developed groundbreaking innovations that are transforming photography.

In this article, we have reviewed Nikon Keymission 360 alongside three other cameras. We are not saying that this product is not worth its salt. We want you to have a glimpse what of different gadgets can offer.

Let's start with an overview of Nikon Keymission 360.

What Is Nikon Keymission 360?

Nikon Keymission 360 is a high-resolution digital camera that captures 4K UHD images. It has a 360-degree field of view. This means it can shoot high-quality videos in all directions from one position.

The camera has 23.9 effective megapixels. It comes with two lenses with a focal length of 1.6mm.

The gadget also comes with a micro USB connector, and it supports Hi-speed USB. It uses a Type D HDMI output. It has a rechargeable Li-ion battery with a charging time of about 2 hours and 20 minutes.

The camera has a CMOS electronic shutter, and it is programmed for automatic exposure.

Nikon Keymission 360 was going for about 500 dollars at the time of this review. You can buy it from the manufacturer. The product is also available on Amazon, Walmart, and eBay among other stores.

We picked three cameras on the market to see how Nikon Keymission 360 compares. The products we selected are Samsung Gear 360, Insta360 4K and Garmin VIRB 360. The reason for this selection is that the cameras are similar to Keymission in several ways.

Starting with Nikon Keymission 360, we subjected each device to seven parameters. We explored the features, price, ease of use, performance, design quality, warranty, and pros and cons. Here is what we found out. 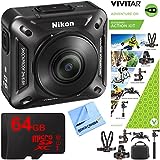 The camera relies on its dedicated app for most of the functions. The SnapBridge 360/170 controls the settings, remote photography, image playback, and so on. You need to install the app on your tablet or smartphone to maximize the usefulness of the camera.

Unfortunately, using the app can be a pain. It is quite unstable. You will probably not be able to use the app after the initial setup.

You can use Nikon Keymission 360 under the water to a depth of 30 meters. The camera is waterproof, and it can withstand low temperatures and shock without the need for an extra cover. It also comes with lens covers for replacement.

There is a large video shutter at the top of the camera and LED indicators for showing when recording is in progress and battery status.

Nikon Keymission 360 gets powered and records immediately you press the shutter button. This is a great feature since you it doesn't take long before you can capture unexpected incidences.

The drawback of the camera's feather-touch shutter buttons is that you keep pressing them unintentionally. A little disturbance can cause the camera to record meaningless footages, say inside your bag.

It's also difficult to determine the battery level unless you use the app which may be unusable. The indicator turns orange when the battery is low, but you can't tell the status before that.

For the reasons explained here, we gave this camera 1 star.

Nikon Keymission 360 can take 360 shots of still images before the need to recharge the battery. It can withstand one hour of continuous video recording.

However, the camera can overheat when shooting 4K videos for a long time until it shuts down. The battery requires about 2 hours and 20 minutes for a full recharge.

This camera takes 2 stars in this category.

The camera has a sturdy body that withstands conditions like water, dust, and shock. It also has a tripod stand for hands-free recording. The battery is removable, and you can replace the lens covers.

The design is quite impressive, but the shutter button is too gentle. For this reason, we awarded the camera 4 stars.

The manufacturer offers a one-year warranty for this product limited to certain conditions. Nikon Keymission 360 gets 4 stars for warranty.

The device has a USB-C port for charging the battery. It runs on one lithium ion battery and requires a microSD card for storage. It supports up to 256GB.

You can purchase it from Amazon.

The camera fits well in the hand so you can hold it to shoot a video. It comes with a tripod to enable you to make long recordings with convenience.

With the camera's intuitive app, you can play, edit, or upload your recordings on YouTube or Facebook using your smartphone.

The camera shoots in all directions using two lenses. You can select one lens to take a 180-degree picture. Switching to either mode is a breeze.

The device and its app don't disappoint. The battery runs for up to three hours depending on your usage. The camera gets 4 stars.

The Samsung Gear 360 is water resistant. It has a protective housing which protects its internal components from splashes. It has tempered glass lenses that prevent breakage or scratches when using the camera.

The product gets 3 stars for design.

This product has a one-year warranty. Conditions are unclear, so Samsung Gear 360 gets 4 stars. 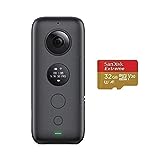 This device is one of the few 360 cameras that are capable of live streaming. It comes with two 4K cameras with fisheye lenses that can view 230 degrees each. It combines the two images in real time to record the scene from all angles.

You can find the Insta360 4K on Amazon and eBay.

This camera assumes a rectangular prism shape that is comfortable in hand. It has two lenses facing opposite sides on its upper part and a small LCD screen at the base.

The camera has a few manual controls. You can hold it to shoot or mount it on a drone or a tripod stand.

Insta360 comes with a studio software that you can use on your computer to manipulate pictures and recordings. The desktop application has limited functions.

The Insta360 App is a more interactive tool. It allows you to control the camera from your smartphone and provides a preview of the shooting. You can also upload files to YouTube and Facebook using the app.

The camera makes high-resolution videos and images. Its battery supports about 100 minutes of continuous 360 shooting. Its desktop software is quite a letdown due to its minimal functions.

The camera gets 4 stars.

Insta360 has a sturdy casing made of a scratch resistant material. The design puts the lenses at an awkward position where they can get scratched easily. Therefore, it's advisable to keep the camera in its protective bag whenever not in use.

Under the camera are several useful features. There is a micro USB interface, a TF card slot, and 3.5mm standard audio jack. At the center is a ¼ screw mount for the tripod next to the reset slot and the power interface.

The manufacturer offers a 12-month conditional warranty for this camera. The product garners 4 stars. 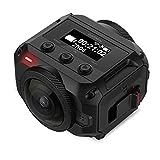 You can edit your videos after filming with smooth pans and wide angles using the camera's HyperFrame Director Mode. The camera achieves smooth videos regardless of its movements courtesy of its spherical stabilization feature.

The gadget is compatible with iOS and Android although live streaming is strictly for Apple devices. Garmin VIRB 360 is waterproof to a depth of 10 meters. The camera is also shockproof.

Garmin Virb 360 is available on Amazon, eBay, and Walmart.

The camera supports multiple recording modes such as manual and Timelapse among others. Photo capture supports burst shots, Timelapse, 360-degree, and Travelapse mode up to 15 megapixels.

Using the Garmin Virb 360 is very easy. It supports voice commands such that you can control the gadget through speech. This eliminates the need to touch the camera during a shooting session especially when not using the app.

Garmin Virb gets 4 stars in this category.

When the battery is full, the camera can record 360-degree videos for 100 minutes. It does not overheat due to prolonged use.

The short battery life of this camera gives it 3 stars.

Garmin Virb 360 is waterproof and shockproof. You can shoot videos under the water without ruining the camera. The casing is durable, and you can replace lenses without tools.

The camera smoothens the video even when taken in shaky motion. It learns the direction of movement and focuses there not to disorient or confuse the viewer.

This camera has a warranty of one year. If you return the product for repair or replacement, the company may extend your warranty by 90 days.

Garmin Virb 360 gets 5 stars for its policies.

We applaud Nikon Keymission 360 for its design. The camera is sturdy, and it can operate when submerged 30 meters in the water. Its high-quality casing makes the device shockproof.

On the other hand, Keymission 360 is a camera with several defects. The most unfortunate thing about it is its unstable app. It doesn’t seem to work, and the camera cannot pair with other devices.

Without the app, you can't manipulate the camera using a smartphone or transfer files seamlessly. The camera sometimes overheats when used for an extended video shoot.

We felt that Nikon doesn't provide value for its price. Our team rated the product rates with 2.5 stars.

Best Cameras for the Money is a participant in the Amazon Services LLC Associates Program, an affiliate advertising program designed to provide a means for sites to earn advertising fees by advertising and linking to Amazon.com.